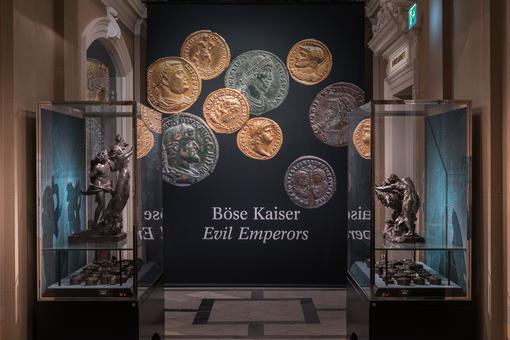 The image of Roman emperors transmitted by classical tradition continues to influence how we see and judge them today. Our view of Roman emperors is strongly affected by how classical tradition depicts them – Caligula, Nero or Commodus, for instance, are poster-boys for megalomania. For posterity is the final arbiter of a ruler’s life and deeds, deeming them benign or evil regardless of his assertions and efforts.

The exhibition confronts statements and appraisals from classical antiquity – some of them contemporary, some written down several generations after the emperor’s death – with coinage. The two sources differ greatly in their origins and how they were formed and have very different aims. At times, they seem to clash and are difficult to reconcile. Although most of what we know about the history of classical antiquity is based on them, this reflects the gulf that separates personal opinions from official accounts.

The exhibition examines clichés and anecdotes and tries to illustrate them with coins selected from the holdings of the Coin Cabinet, one of the largest and most important collections in the world comprising around 600.000 objects including 90.000 Roman coins. The choice of rulers runs from murderous Caligula and Nero, the arsonist of Rome, to the persecutors of Christians, to Julian the Apostate, thus, well into the fourth century AD.