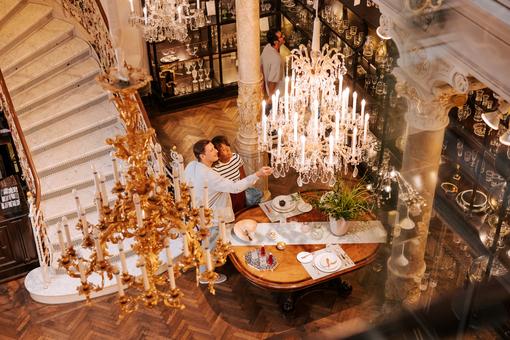 Crystal glass manufacturer J. & L. Lobmeyr was among the best-known participants in the 1873 Vienna World's Fair and celebrated great success there. Company founder Ludwig Lobmeyr received numerous awards for his designs and also sat on the judging panel himself. Incidentally, the company was even able to fit out the Imperial Pavilion, among other things with the lavishly engraved Emperor service and am impressive mirror, which can still be marveled at today in the store on Kärntner Strasse. The family company established in 1823 is known for extremely delicate drinking glasses in countless designs, but also for its impressive and magnificent chandeliers.

One of the oldest series at Lobmeyr is Service No. 4 from 1856. It was shown at the 1873 World's Fair and has been a permanent bestseller ever since. Now as then, the service impresses with its simplicity.

In 2023, J. & L. Lobmeyr celebrates its 200th anniversary. Two exhibitions at the Lobmeyr headquarters on Kärntner Straße 26 are dedicated to the world exhibition and Lobmeyr's company anniversary.

The anniversary will be celebrated with two exhibitions on the second floor of the Lobmeyr head office at Kärntner Strasse 26: From April to July 2023, the focus is on Lobmeyr at (world) exhibitions and spans an arc from the 1862 London World's Fair via Vienna in 1873, Cologne in 1914, and Paris in 1925 to the "Passionswege" of Viennese Design Week of more recent times. From September to December 2023, an exhibition will run under the motto "Design" and deal with the design process, the understanding of materials, and the icons that arose at Lobmeyr over the last 200 years.