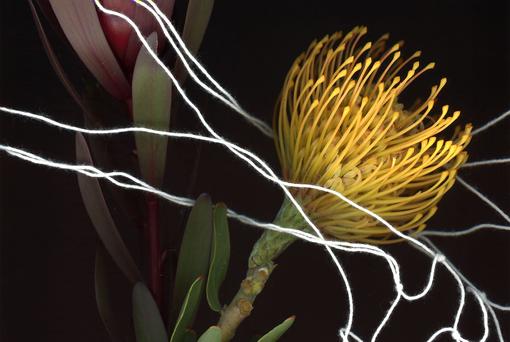 This recognition of the hybrid as well as the development of colonial cultures and history is the theme of T. Lauw in Dark Pairing  by interweaving plants in a fine-meshed network. Images of cultural inscription and overlay arise precisely from the impossibility of unraveling the materials. The net is no longer just a symbol of capture, but becomes the carrier of the other. At the same time, it is precisely through this function of the wing that it maintains its dominant position: the network not only determines the formation and arrangement of the individual flowers, it also decides what is in front and behind, an outside and an inside: it becomes a border location. In Dark Pairing this obvious upper hand disappears in favor of a fine interweaving of the materials. Instead of wire, we are now dealing with knotted yarn, which forms a common network with the plants. Despite the poetic-visual language, the brutality of colonial rule becomes the red line of T. Lauw's works.