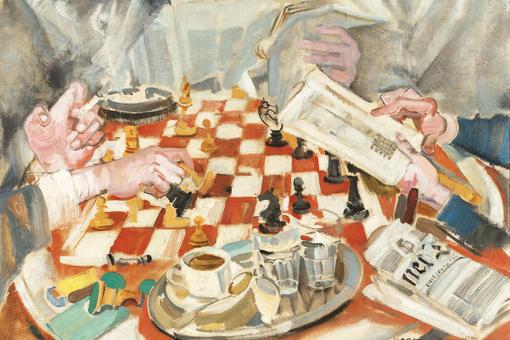 Max Oppenheimer was an Expressionist of the first hour. Born in Vienna in 1885, he studied first at the Vienna Academy of Fine Arts and later at the Academy of Arts in Prague. He took part in the legendary exhibitions Kunstschau Wien 1908 and Internationale Kunstschau Wien 1909, where he made the acquaintance of numerous progressive artists of the time, such as Oskar Kokoschka (1886-1980), Egon Schiele (1890-1918) and Albert Paris Gütersloh (1887-1973). Egon Schiele, who was five years younger, actively sought contact with Oppenheimer in 1909. Their friendly relationship lasted for years and manifested itself, for example, in the joint work in Schiele's studio (winter 1910/11) or in the mutual appreciation of their artistic works. An initial friendship with Kokoschka developed into outright enmity due to rivalries between the two protagonists of the Austrian avant-garde. The invasion of Austria by German troops in 1938 forced the artist to flee and he emigrated via Switzerland to the USA, where he died in 1954.

With this long overdue, large-scale show, the Leopold Museum intends to shed new light on Max Oppenheimer's unjustly largely forgotten and equally important and groundbreaking oeuvre and to open up its comprehensive treasure trove of motifs. In addition, the role of the artist and his networks will be explored on the basis of his contemporaries Oskar Kokoschka and Egon Schiele