Basquiat. Of Symbols and Signs 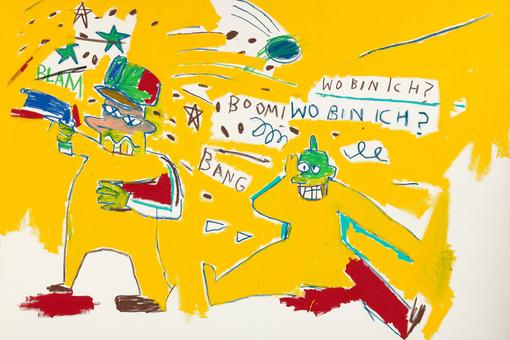 Basquiat. Of Symbols and Signs is the first major museum retrospective of the extraordinary work of Jean-Michel Basquiat (1960–1988) in Vienna. With his symbolic, complex, and often emotionally charged artworks, Jean-Michel Basquiat transforms the art world and cultural production in the 1980s. Yet even today, thirty years after his untimely death, his postmodern, political lineage seems stronger than ever. Basquiat's highly symbolic paintings often take up political themes, criticizing racism, social injustice, and consumer capitalism.

His diverse oeuvre reflects how Basquiat sets his powerful compositions against hierarchies and rules. He draws inspiration from cartoons, children's drawings, advertising as well as from his own Haitian and Puerto Rican heritage and a convergence of African American, African, and Aztec cultural histories with classical themes and contemporary heroes such as athletes and musicians. The use of linguistic signs and of symbols is part of Basquiat's artistic practice, from his very earliest drawings to his poetic-conceptual graffiti, from his notebooks to his later drawings and paintings. At the same time, they point to Basquiat's profound understanding of art history and testify to the artistic sensibility with which he reflects his contemporary cultural and political environment.

The presentation of some 80 major works from renowned public and private collections will provide new insights into Basquiat's unique visual language and decipher the content of his artistic ideas.