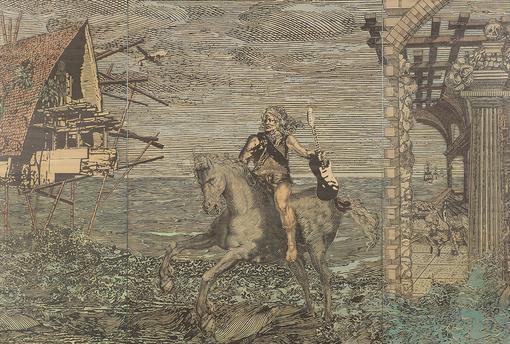 Hans Weigard. Rider in the Storm

The ALBERTINA introduces Hans Weigand with a selection of his most recent works: a sensitive graphic artist and painter, he resorts to ancient media rich in tradition, translating them into a present context. In that same vein, the presentation focuses on Hans Weigand as a forward-looking object artist and musician who is thoroughly up to date through his choice of subject matter and work titles, both of which are socially critical most of the time: from their mere appearance it is hard to guess that many of them are named after songs by such bands as The Doors or The Clash, which can be assigned to psychedelic rock and early punk.

In Weigand’s oeuvre, not only do contemporary motifs collide with the imagery of old masters. Also, such traditional techniques as the woodcut are realized in an essentially unconventional and contemporary fashion.