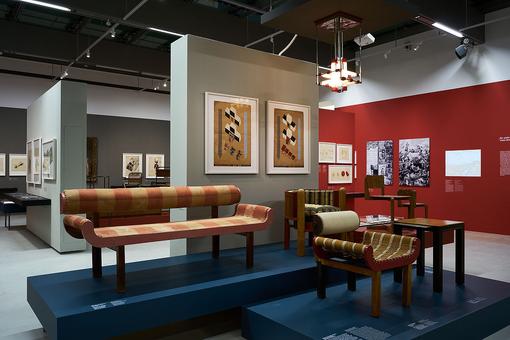 Cupboards that conceal stackable armchairs, pedestals that become beds, strictly geometric forms and bold colors: the joint studio of Friedl Dicker (1898-1944) and Franz Singer (1896-1954) stood for these kinds of surprising and innovative designs in interwar Vienna. Grounded in the principles of economy of space and diversity of use, the two Bauhaus students developed a distinctive style of furnishing that occupied a special place in Vienna’s residential culture.

Although Singer and Dicker received numerous commissions in the 1920s and early 1930s, their work is almost entirely lost. During the Nazi era, their clients, most of whom were Jewish, were persecuted. The studio’s furnishings were largely destroyed, only a few pieces, brought with them by exiles, survived. Singer himself moved to London in 1934; Dicker was murdered at Auschwitz in 1944. For decades, the work of the two designers fell into oblivion. Since the 1980s, it has been gradually rediscovered.

Based on new research, the exhibition presents the studio’s most important work from the Bauhaus until emigration. Impressive depictions of interiors (axonometric drawing), photographs, models, and furniture pieces add important perspectives to our understanding of Viennese Modernism: from the Montessori kindergarten in the Goethehof to the luxurious Auersperg-Hériot guest house, from the innovative tubular steel chair to the Phantasus construction kit, a replica of which allows visitors to playfully learn about Dicker and Singer's design principles in the exhibition.