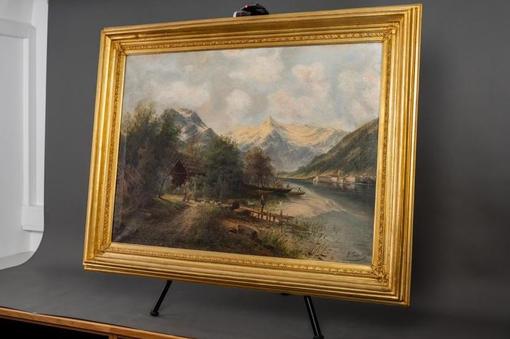 Countless works of art were seized in the context of Nazi persecution. Prominent cases and objects have given rise to frequent media reports and increased public interest in the topic. This has led many people to ask themselves what they should do with items in their possession that might have been acquired through systematic expropriation or forced sale due to Nazi persecution.

This specific example of a landscape painting illustrates how some people profited from the belongings of the Nazi regime’s victims. At the same time, the painting reveals the stories told within families about such cases—often to this day. The only thing that is known about this picture is that it originally belonged to a family who lived in Vienna at Liechtensteinstrasse 45—perhaps this exhibition will help in the search for its legal owners.

On view in the foyer of the Haus der Geschichte Österreich.