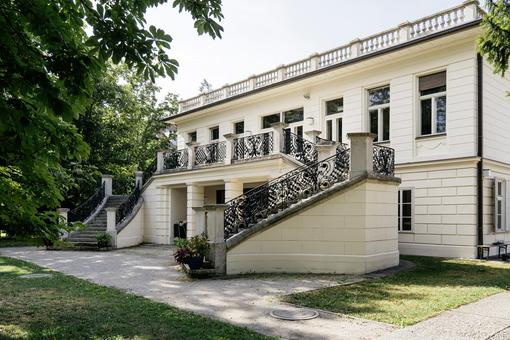 The permanent exhibition is on display in and around Klimt’s studio – the only exhibition to be housed in a place where he worked.

Especially in Vienna, but in fact all over the world, Klimt has come to seem ubiquitous. His art has become common property. What is forgotten is what has been lost in relation to his works and his life: stolen art, restored art, missing art, and countless stories about collectors, perpetrators and victims.

Klimt’s final studio can still be found within extensive gardens on the outskirts of Vienna. A single rosebush has survived here for all that time, nothing more. Klimt has been dead for over one hundred years. His collectors and patrons are also no longer alive. In many cases they were persecuted by the Nazis, robbed, driven into exile or murdered. Some of Klimt’s oeuvre was lost, burned or disappeared without trace. The rest no longer hangs in the salons of his collectors, but more often on the walls of museums. The everyday lives that were played out against the backdrop of his paintings are as lost to us now as the close, personal ties that once existed between owner and artwork.

The exhibition therefore asks questions about how to approach a loss that reaches far beyond the individual works of art. It also introduces a general public to some of the protagonists of both past and present day, and brings a new perspective to the lost Klimts.