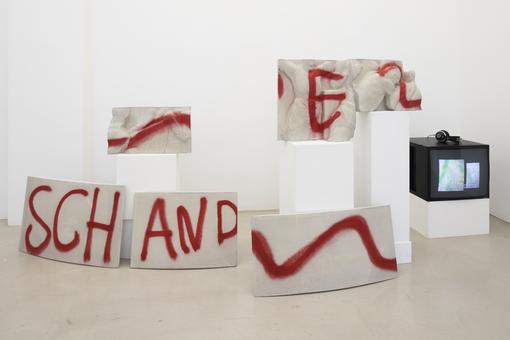 Art Against the Status Quo

Vienna is awash in discussions of its recent past. Sometimes, it seems like the entire city is a trace of the 20th-century’s darkest chapters. Monuments recall the heroic deeds of anti-Semitic majors while the Nazis’ flak towers dominate the urban landscape. How are Vienna’s young artists reacting to this situation?

Art Against the Status Quo surveys contrary designs for the city’s public sphere. Collectively, the eight positions articulate an alternative approach to history and memory – one that does not take the past as bygone, but as the site for ongoing critical intervention. The approach is processual in that the very engagement with history is taken as a space for artistic practice.

The presentation is conceived in conjunction with Vienna Falls in Line. That exhibit, shown at the MUSA concurrently, unearths the astonishing presence Nazi art still has in Vienna’s municipal collection. The looming question concerns the future of these objects. Should they be stashed away, discarded, exhibited? The participants in Art Against the Status Quo broaden the concern to the city at large. In doing so, they deploy a critical aesthetic as the most potent means to engage and transform a city utterly scarred by its past.