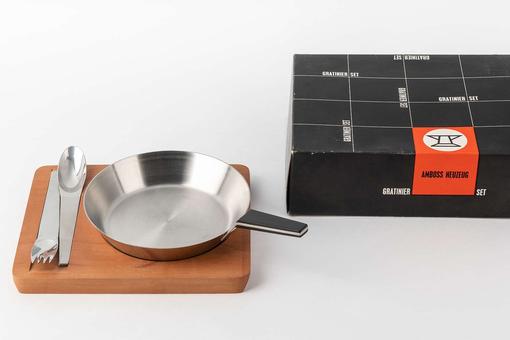 In the early 1950s, when the economic upswing began after the war, the eating and nutritional habits of Austrians also changed. The desire to cook increased, and so did the enjoyment of the aesthetics of food and table setting. "Beautiful food" was now no longer an elite topic, but also became relevant and affordable for the middle class.

The rise of the Austrian cutlery manufacturer Neuzeughammer Ambosswerk in the Steyr Valley can be observed in this context. Starting in 1950, the company evolved from an artisan knife and steelware maker to an industrial producer of modern stainless steel cutlery. Designers such as Carl Auböck, Helmut Alder and János Megyik created beautifully shaped products for the modern household for the Anvil company, which were awarded numerous design prizes.
Against the atmospheric background of the dining, everyday and living culture of the 1950s to 1970s, the story of the Anvil company is told. The lily porcelain service "Daisy", which has mutated into a synonym for the Fifties, is widely known - the anvil cutlery, on the other hand, is still to be discovered in the exhibition.