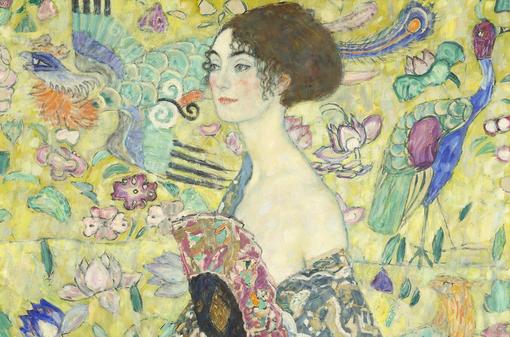 It is Gustav Klimt’s last, almost completed painting and a fascinating, self-confident female portrait: Lady with Fan. In Vienna as a loan to the Belvedere, this important late work will be presented at the Upper Belvedere in a special exhibition devoted to Klimt’s final artistic phase.

Shortly after Gustav Klimt’s death in 1918, a photograph was taken in the artist’s studio. It shows two paintings, each displayed on an easel: Lady with Fan and the unfinished work The Bride. While the latter has been on loan to the Belvedere for decades, the arrival of Lady with Fan in Vienna represents an important addition to the display of Gustav Klimt’s oeuvre. The Belvedere is presenting a fascinating show about the final artistic phase in the work of Vienna’s iconic artist.

The first part of the exhibition focuses on Klimt's late, unfinished works. Starting in October 2021, the show will add a component: Klimt's affinity for East Asian art styles.

Lady with Fan was influenced by Chinese and Japanese art especially. Wrapped in a Chinese robe, the lady flirtatiously hides behind a decorated fan. The yellow wallpaper in the background features several characteristic motifs that are ubiquitous symbols of good fortune in East-Asian art: the Chinese phoenix (fenghuang), a crane, a golden pheasant, and the lotus flower. Another reference to Japanese painting is the lady with a fan herself: bijin-ga, Japanese woodblock portraits of beautiful celebrities such as geishas, featured prominently in Klimt's extensive collection of Asian artifacts.

Lady with Fan has only been exhibited once in Vienna: over a century ago at the Kunstschau in 1920.