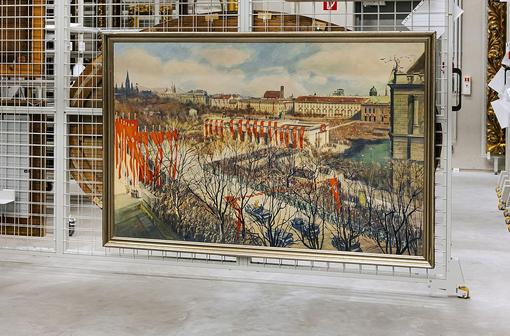 The Politics of Art under National Socialism

After the so-called Anschluss of Austria on March 12, 1938, all art associations were forcibly dissolved by the Nazi regime. In their place, the Reich Chamber of Fine Arts (Reichskammer der bildenden Künste, RdbK) took control of all artistic endeavors. Membership was a prerequisite for professional art work, making  it a de facto obligation for active artists. Persons with Jewish backgrounds, political dissidents, and artists considered too avant-garde were denied membership.

The membership files of the Reich Chamber of Fine Arts have been preserved. New research into these materials, comprising information on around 3,000 artists, provides insight into the political power structures, processes, networks, and artistic attitudes of the Nazi regime, the actors, and their artworks.

The exhibition “Vienna Falls in Line” presents these new findings. Original objects and documents provide information about the working artists of Nazi Vienna in general and their production of explicitly political propaganda art in particular. The role of Vienna’s municipality as an important patron of Nazi art is explored as are the “Gottbegnadeten”, the category of exceptional creators who enjoyed special privileges in the Third Reich. In conclusion, the exhibit shines a light on the situation after 1945, examining the aesthetic and personal continuities evidenced in individual artistic careers.