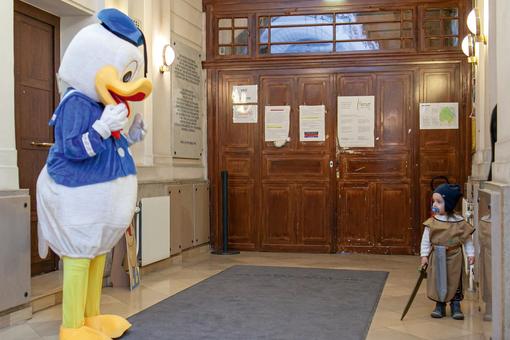 The photographer Ouriel Morgensztern is a citoyen du monde, a citizen of the world, who lets us travel through the gaze of his camera. Born in Paris, he grew up in a village in the south of France, before eventually finding the center of his life in Vienna almost twenty years ago after stays in New York and a kibbutz in Israel. Since then, he has accompanied the Jewish community with his camera. Twenty-five years after the exhibition by Harry Weber and nearly ten years after the one by Josef Polleross, Morgensztern’s photographs in the Jewish Museum Vienna offer a current insight into the diverse Jewish community in this city. Ouriel Morgensztern also leads the viewer to other places in his life, whose shapes and colors he captures precisely and emphatically: from the rural tranquility of his southern French homeland to the splendor of the Ringstrasse in Vienna, from Tel Aviv’s architectural geometry in concrete to the unpaved paths of a village in Rwanda.